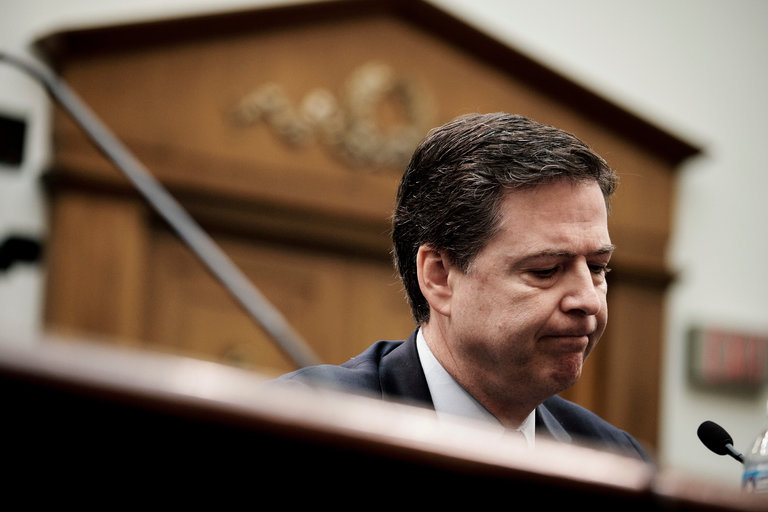 It seems very clear to me that FBI Director Comey’s October 28 letter announcing a reopening of the investigation into e-mails from Hillary Clinton changed the outcome of the election. For nine of the last 11 days before the election, the negative story dominated the news and cast a cloud over her candidacy, and the polls reflected a downturn for Clinton during that same time. In the end, Clinton narrowly lost four states — Florida, Wisconsin, Michigan and Pennsylvania — where voters who said they decided in the last week greatly favored Trump.  I think it is safe to say that without Comey’s letter, Clinton would be our President.

As strange, and possibly illegal, as it was for Comey to make his announcement regarding the investigation so close to the election, from the outset, I wondered what the legal grounds were for searching through the new e-mails found on the laptop of her aide Huma Abedin’s estranged husband Anthony Weiner. Two days after the letter, on Sunday October 30, the New York Times reported that the Justice Department had obtained a search warrant.  I have yet to see any further reporting on the warrant. To get a search warrant issued, the FBI needed to go to a federal judge. It is interesting to me that Comey sent his letter before obtaining the warrant. The publicity certainly must have influenced the judge. A judge cannot simply grant any request for a search warrant. Under the Fourth Amendment, a search must be reasonable, meaning that there must be “probable cause” or a “reasonable suspicion” that evidence of a crime will be discovered. Ordinarily, the FBI submits an affidavit describing the evidence that gives rise to the reasonable suspicion. We have yet to see what evidence the FBI relied on in seeking the warrant.

The only thing Comey said in his letter about the grounds for reviewing the e-mails found on Weiner’s laptop was that they “appear to be pertinent” to the FBI’s prior investigation of Clinton’s use of a private e-mail server as Secretary of State. But it is important to remember how unusual and politically motivated the investigation was, and that it had never elicited any evidence of a crime.

Certainly since the Watergate investigations led to the recommendation of impeachment and resignation of Richard Nixon, Republicans have dreamed of doing the same thing to a Democratic president.  During the presidency of Bill Clinton, investigations into allegations concerning the Whitewater real estate development turned into a roving investigation in search of a crime (Travelgate, Filegate), until finally stumbling on Bill Clinton’s false denial of a recent affair with White House aide Monica Lewinsky in a deposition concerning allegations by Paula Jones of harassment prior to his election. The same pattern reappeared in the Republican-led Benghazi investigation, which ultimately found no wrongdoing by Secretary of State Hillary Clinton, but uncovered that she had, against State Department policies, used a private e-mail server for State Department business. This resulted in a further investigation, despite the fact that there was no reason to believe any crime had been committed.

Still, because the private server had been used for public business, Clinton could not object to requests to search her work-related e-mails, which were delivered to Congressional investigators in 2014. In July 2016, FBI director Comey concluded that after reviewing tens of thousands of e-mails, there was no evidence that any prosecutable crime had occurred.

There are millions of federal employees with access to classified information, and all of them leave the office and go home, where they talk to other people, make telephone calls, write letters and diaries, and send texts and e-mails. Simply because someone has the ability to commit the crime of intentionally violating laws governing the handling of classified information does not give rise to a reasonable suspicion that any crime has been committed.  If it did, then the FBI could at any time gain a search warrant to inspect the private communications of each and every employee with security clearance.

I can think of two possible explanations. It could be that Comey, like most Republicans, believed that there was a sufficient cloud of suspicion over Hillary Clinton to justify pretty much any investigation. Think of how the FBI might treat a notorious gangster like Al Capone. “Get me something on him! Anything!” the FBI director might tell his subordinates. That certainly seems to be how many in the FBI thought of Clinton, even after Comey had reported in July that there would be no prosecution. Some agents were already in open revolt over the e-mail probe three weeks prior to Comey’s surprise announcement. So maybe they never even thought much about the probable cause requirement, and perhaps the judge signed the search warrant, mindful of the intense public attention to the issue, without really considering the legal standard of whether the suspicions raised were reasonable.

But it could also be that the FBI made a serious attempt to show probable cause, and submitted affidavits from investigators supporting the issuance of the warrant. Often the FBI relies on confidential informants, and so the affidavit might contain new allegations of criminal activity and evidence different from what had already been reviewed and dismissed as insufficient in July. It is this possibility that has me most interested in the case. What if the new allegations came from people associated with the Trump campaign? What if the allegations were intentionally false? During the nine days when the investigation was underway, Trump surrogate Rudy Giuliani made public statements suggesting he was in communication with the FBI about the ongoing investigation. It does not seem too far-fetched to believe that politically-motivated individuals might have tried to get the FBI to re-open the investigation of Clinton by making false allegations. Finding Huma Abedin’s e-mails on Weiner’s laptop might have been just an opportunity to carry out their wishes.

We need to remember that whatever suspicions were raised by the FBI when it sought the new search warrant, those suspicions turned out to be groundless. Whoever thought that Clinton committed a crime in mishandling her e-mails was wrong. And whoever thought that the e-mails on Weiner’s laptop contained evidence of that crime was also wrong. Remember, this is not a case where the FBI was investigating a particular crime or something reported by a victim. No dead body had been found. There was never any suggestion of a specific security breach, as there was when CIA agent Valerie Plame was exposed in a Washington Post article. This was, and has always been, a Republican-inspired fishing expedition that came up empty. It is now time to turn our focus on those who encouraged and led the investigation, to determine whether in fact a real crime has been committed by the FBI or those who informed its investigation.

My hope is that the press, and perhaps the Justice Department, are already looking at this in a more expedited fashion. Richard Painter, a former White House chief ethics lawyer in the Bush administration, has also called for an investigation. For my part, I have made a FOIA request to the FBI to see the search warrant and supporting affidavits. This is potentially very serious, something that if traced back to Donald Trump might even lead to impeachment. It deserves to be investigated fully and openly, and quickly, because if a crime was committed in the course of the FBI investigation, it is the crime of the century.