Last night I watched a long video of Peter Beinart’s November 4, 2015 appearance at Beth Chayim Chadashim with Rabbi Sharon Brous of IKAR.  Beinart is correct that he did not attempt to justify terrorism against Israel when he said that he believed that some of Israel’s policies have contributed to the terrorism problem (“Israel is reaping what it has sowed.“)  But he did say something at the very end of his talk that I found disturbing.

At the end of the program (at 1:21:30), in answering the final question, Beinart went on a riff about what he perceives as the misplaced priorities of the American Jewish community:

The American Jewish community has spent . . . and this may be a controversial thing to say, but I think we have spent too much money on Holocaust memorials and not enough on Jewish education.  I think it says something very troubling about a community where you can go into city after city and they have built these Holocaust memorials which are gleaming and very impressive. And then you go to the Jewish day school and it is crumbling. I mean there’s no gym, there’s no science lab.  What does it say about a community that’s more interested in memorializing its dead than providing for its future?

So, two things.  First, Beinart is factually wrong.  If you look at Los Angeles, for example, it is true that in the past 25 years we have built both the Museum of Tolerance and the new building for Los Angeles Museum of the Holocaust.  At the same time, our community has also built a number of new Jewish day schools, including Milken Community Schools, deToledo High School, Brawerman Elementary School, and greatly expanded others, such as Sinai Akiba Academy, Shalhevet, and Yavneh Hebrew Academy.  You’ll find state of the art science labs and excellent gyms at all of these schools, and many others in and around Los Angeles.  These Jewish schools have also been building up their endowments, thanks to a program sponsored by the Bureau of Jewish Education, Partnership for Excellence in Jewish Education (PEJE) and the Avi Chai Foundation.  So Jewish education is not “crumbling” in Los Angeles.  And I doubt it is crumbling in any other Jewish community that has invested in a Holocaust museum.

But second, Beinart is setting up a false dichotomy.  Indeed, when you look at the major donor lists, you find that the same families are supporting both Jewish schools and Holocaust museums.  Why?  Because our Jewish schools and our Holocaust museums serve different functions that are not mutually exclusive.  In fact, they complement each other.  Jewish schools naturally serve just the Jewish community, and in particular a subset that wants its children to learn Hebrew and religious observance. Our museums serve a much larger community, and one that is largely non-Jewish. Certainly, one great aspect of our Holocaust museums is that they are places where Jews can memorialize the victims, and teach our young the terrible history of our recent past.  But these museums also, indeed primarily, serve to teach non-Jews about our history.  Those of us who contribute to both Jewish education and Holocaust museums know that while it is important to continue Jewish traditions, it is equally important to educate non-Jews about our history and the terrible consequences of anti-Semitism.

What would it say of our community if we only built Jewish schools, teaching, as Bienart suggests, the holidays of Purim and Simchat Torah, but neglected our role as interpreters of the Holocaust?  One of the things that makes us human is our sense of history. Our schools are designed to transmit the history of our species, and so we learn about the great civilizations, the Egyptians, the Greeks, the Romans, etc.  We learn about great conflicts, the Peloponnesian Wars, the Battle of Hastings, the Thirty Years War, the Napoleonic Wars and the American Revolution and Civil War.  And, from now on and for the next thousands of years, we will teach our children about World War II, the distinguishing feature of which will be the Holocaust, the greatest mass-murder in the history of mankind.

We have the privilege of living with the last generation of survivors, who are first-hand witnesses to the history that will be taught for millennia.  Our Holocaust museums are designed to collect and marshall the evidence while we still can, to package and deliver it to people in an effective manner.  Our Holocaust museum serve also as places for the inter-generational transmission of history.  There are few other places where you will regularly find a 90-year-old teaching a class of 8th graders, as happens every day in our Holocaust museums. 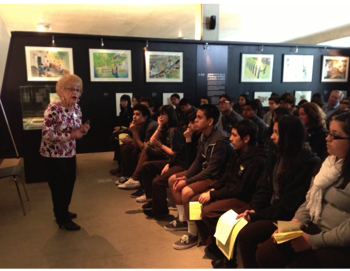 So why does someone like Peter Beinart make such a grave error when speaking about Holocaust museums?  My theory is that it comes down to his genealogy. Beinart’s parents were from South Africa, so his heritage is a mixture of early Russian and Lithuanian immigrants from the pogroms as well as one grandmother from Egypt. He probably doesn’t feel that his family was very affected by the Holocaust.  I’ve seen this very often also in the United States.  There are many American Jews for whom it comes as a shock to learn that the defining moments of Jewish history over the past 100 or even 1,000 years were the Holocaust and the creation of the State of Israel — and they missed them both!  (They thought that it was growing up in Brooklyn, listening to Bob Dylan and Barbra Streisand, and rooting for the Dodgers.) These folks like to build different types of museums, like the National Museum of American Jewish History in Philadelphia, which was completely empty when I visited last March. (Really, I did not see one other person inside, although the nearby Barnes Foundation museum had been full of people when I visited there an hour earlier.)  But their story just doesn’t resonate — not with Jews and not with non-Jews.  Meanwhile our Holocaust museums are booming.  (For example, LAMOTH‘s attendance increased 25% each of the past two years and is set to increase another 7% this year.)

The good news is that views like Beinart’s will die out as the generations move forward.  Before too long, every Jewish family will be descended or connected to a Holocaust survivor family.  That’s just how genealogy works.  But in the meantime, those of who really understand the importance of the Holocaust to Jewish continuity will continue to pour our support into our museums as well as our Jewish schools.

I was so taken with Leonard Mlodinow‘s new book The Upright Thinkers, that I went on Amazon and ordered some of his previous books, including The Drunkard’s Walk: How Randomness Rules Our Lives. In an early chapter discussing the mathematical development of probability, Mlodinow discusses the Monty Hall problem, made famous in 1990 by Marilyn vos Savant in Parade magazine.  In her Ask Marilyn column, reproduced (with slight modifications) by Mlodinow, Savant was asked:

Suppose the contestants on a game show are given the choice of three doors: Behind one door is a car; behind the others, goats. After a contestant picks a door, the host, who knows what’s behind all the doors, opens one of the unchosen doors, which reveals a goat. He then says to the contestant, “Do you want to switch to the other unopened door?” Is it to the contestant’s advantage to make the switch?

Marilyn answered “yes,” but thousands of her readers, including some with advanced degrees, wrote her to tell her she made a mistake.  Marilyn solved the problem using elementary probability.  If you are given a choice of three doors, you will pick the correct one just 1/3 of the time.  For the 2/3 of the time that you initially chose incorrectly, you could win by switching your choice to the door that remains after the host reveals the first goat.  This seems a bit counterintuitive, which is why so many of her readers were upset, because you are still left choosing between two doors, not knowing what is behind either one.  It seems like a 50-50 choice.

Many people, including Mlodinow, use this example to show how our intuition can be faulty and not correct according to the laws of probability.  Daniel Kahneman won a Nobel Prize in Economics for this type of work.  But the problem with this example (and even some of Kahneman’s that I have read) is that they don’t really prove that our intuition is wrong.

Take the Monty Hall problem.  Look at it more closely and consider this: how does the contestant know what game he is playing?  All he knows is that he was asked to choose one of three doors, then one of the unchosen doors was exposed and he was asked whether he wanted to switch.  That’s it.  The contestant has no way of knowing what game the host is actually playing.  And that makes all the difference for what our intuition tells us to do.

It isn’t hard to imagine that this is not the game that Marilyn thought it was.  What if the game was this: if you choose incorrectly, the host opens the door to reveal your goat; but if you choose correctly, the host tries to induce you to change until you pick a door that has a goat or accept a smaller gift.  Sometimes he opens one of the unopened doors to reveal a goat and asks if you want to switch to the other unopened door (as in Marilyn’s example). Sometimes he asks you if you want cash instead of what is behind the door you chose.  Etc. Etc.  You never know if or how the game will end.  Now this game looks to you the contestant exactly like the game that Marilyn described.  If the host induces you to switch your choice, it means you’ve lost.  Do you want to follow Marilyn’s advice?  You’d lose every single time.

So, back to our supposedly faulty intuition.  Is it really so bad?  What makes more sense: that the host would give us an easy chance to double our odds of winning, or that he would try to trick us into giving up our correct choice?  Our intuition tells us to be skeptical.  It tells us that we don’t have enough information to know what game we are playing, and so the choice is really 50-50.  We just don’t know if the information we received when the host revealed the goat really means anything.  So we are left again with choosing randomly between two doors.

While it is certainly true that our intuition often is at odds with the laws of probability, (and indeed that is why many people are initially confused by this problem), it turns out that the confusion is sometimes more warranted than strict probabilists are willing to admit.  There are plenty of real-world examples that show how bad people are at probability.  Take, for example, the fact that so many people buy lottery tickets, which are a terrible bet that no one in his right mind would take.  (In other words, the expected payoff is far less than the cost of a ticket.)  It makes you wonder though, why so many smart people like to use completely unreal problems, like the Trolley problem, or flawed ones like the Monty Hall problem, to make the same point.  You really cannot test the correctness of our real-world intuition with unreal make-believe problems where people can’t even know what game they are playing.

[For a more thorough enumeration of how Marilyn might have been wrong when answering this problem, see Herb Weiner’s Marilyn is tricked by a game show host.]