After largely ignoring the 100th anniversary in 2012 of the composition of Schoenberg’s Pierrot Lunaire, the Los Angeles music community is about to celebrate the 100th year of Stravinsky’s Rite of Spring in typical a-historical fashion.  Breathlessly announcing the upcoming festivities, art critic Edward Goldman writes on the kcrw art talk page:

Exactly one hundred years ago, a riot broke out among the Parisian sophisticates attending the premiere performance by the Ballets Russes of Le Sacre du printemps, otherwise known as “The Rite of Spring.” Since then, the names of its composer, Igor Stravinsky; impresario, Sergei Diaghilev; and choreographer, Vaslav Nijinsky have become synonymous with the birth of 20th century modern culture.

I suppose if one only looked to France, and ignored Austria and Germany, one might consider only Stravinsky, Diaghilev and Nijinsky’s achievement “synonymous with the birth of 20th century modern culture.”  Of course, the Rite‘s premiere on May 29, 1913 came a bit too late for that honor. 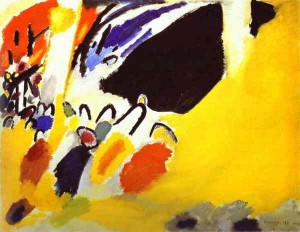 I would argue that the Munich premiere of Schoenberg’s Three Pieces for Piano, Op. 11 on January 2, 1911, which gave rise the next day to Kandinsky’s Impressions III (Concert), holds a greater claim to the title.

I’ve often wondered if anyone has explored whether the rioting in Paris at the Rite‘s first performance on May 29, 1913 might have been influenced by news reports of the huge riot that took place at the famous Skandalkonzert conducted by Schoenberg in Vienna two months earlier, on March 31, 1913.  At that orchestral concert at the Vienna Konzertverein, fistfights broke out during the performance of Alban Berg’s Altenberglieder and the concert had to be stopped.  How was the Vienna riot reported in Paris? 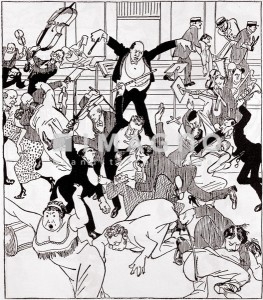 In the Supplement to Nicolas Slonimsky’s Lexicon of Musical Invective, he includes the following review published in Paris-Midi on May 29, 1913, the day of the premiere of Stravinsky’s Rite:

Yesterday’s concert merits our attention for historic reasons.  It was indeed on May 28, 1913, at about ten o’clock in the evening that musical cubism made its appearance in the fair city of Paris.  By singular irony of fate, it was in the venerable hall of the Conservatoire, the temple of all tradition, that this revelation took place.  The Société Musicale Indépendante presented a concert there offering to its habitués the first performance of three piano pieces by Arnold Schoenberg.  This composer hails from Vienna, preceded by an intriguing reputation.  Every performance of one of his works in Austria and Germany has provoked disorders, police intervention, transportation of the wounded to the hospital and of the dead bodies to the morgue.  At the sound of the last chord the listeners would come to blows, and music lovers strewn on the floor would be picked up in bunches.  So we awaited with impatience the first contact of this explosive art with French sensibilities, and the organizers had provided stretchers and mobilized ambulance drivers to clear the hall after the deflagration.  But all expectations were deceived.  The pianist E. R Schmitz, who was assigned the task of igniting the fuse, could accomplish his dangerous exercise in perfect silence.  True, there were some uncomfortable smiles, some anguished sighs, some stifled groans, but no scandal erupted.  Arnold Schoenberg would not believe it!  The French public has resigned itself to the fact that music eludes it and has renounced public protests. . . .  And we are appalled by the speed with which musical conceptions replace each other, overtake each other and destroy each other.  Composers like Debussy and Ravel could not preserve for more than a year or two their revolutionary label and they are already relegated to the retrograde group even before they have succeeded in making themselves comprehensible to the crowd!  It is, alas, in music that new stars rapidly become old moons!

Has anyone researched how these, and perhaps other Paris newspaper reviews, might have precipitated the riot at the Rite?