The day began too early, with a silly phone call at 3am from Budapest from someone who thought I was in Los Angeles.  Should have put the phone on silent, I guess.  Afterwards, neither Nathan nor I could fall asleep.  Finally got back to sleep around 7:30am, but then had to wake up again so we could get to a meeting I set for 10am at the new Jewish cemetery.

During the trip I wanted to try to make some headway in getting the Jewish Community to make the cemetery database available for genealogists.  The Vienna Jewish Community put its much larger database online years ago.  So I got in touch with Zuzana Beránková, who administers the cemetery for the Jewish community.  We met in her office along with Rabbi Chaim Koci who represents the Jewish Community in these matters.  My cousin Helena Vankova showed up with her two year old son Adam and joined us, which was nice because Helena’s husband Daniel is a good friend of Rabbi Koci.

Bottom line is that they want money, about 15 500,- EUR in order to make the database of over 20,000 names public on their own website.  The data is ready, but they want to recoup some of the cost of compiling it and perhaps use it for further work on other cemeteries.  Nathan thinks it is ridiculous, but I suppose that’s how these things work. They have something that we want, and hope that they can get something for it.  Others might consider it a duty or even a mitzvah for the Jewish Community to help Jews with family members in the cemetery find their loved ones and remember them.  But even mitzvahs can cost money, I suppose.  So I will see if I can help raise the necessary funds.

They should make the data available on the JewishGen Online Worldwide Burial Registry, but they want to keep control.  It’s a mistake, because now only those who know to research in Prague will use it.  But Prague, like all major cities, was a magnet for Jews from the surrounding smaller towns, especially from Galicia.  While a Galizianer might search a surname at JewishGen and find a cousin in Prague they never knew existed, they aren’t likely to search a Prague database. So they will lose all those if they do it themselves and don’t share with JewishGen.

Helena and Nathan and I walked through the cemetery.  I took photos of all the tombstones with names I recognized, about 20 percent of them.  All these very common Prague family names that do not exist anymore: Nachod, Beständig, Porges, Bondy, Schifferes, Moscheles, Taussig, Teweles, Klemperer, Wehle, Wantoch. You can see a list of about 200 of them on the genealogy website I have been working on, that ties them all together in one big tree.  Helena showed us some of her family graves, which are in prominent locations in the cemetery, easy to find. They must have been relatively well off.

Then we met my friend Julius Müller, for my money the best genealogical researcher in Bohemia and Moravia.  First we went to lunch, and I had another typical goulasch with a somewhat canned knödel.  (It was sliced, but you’re supposed to pick it apart with a fork.)  After lunch we went to the older cemetery in Zizkov.  This one was mostly destroyed in the 1980s when the Communists decided they needed a giant radio tower in the center of town.  Julius said the tower was really used to block reception of Radio Free Europe.  Didn’t work, I guess, since the Communists fell in 1989 anyway.  The Jewish Community was apparently too weak or complicit to stop the demolition of 5/6 of the cemetery.

I noticed again that it seemed that only the oldest tombstones, all in Hebrew, survived.  The cemetery lasted from 1780-1890 and therefore most of the tombstones should be in German.  Jews in Bohemia and Moravia predominantly spoke German after 1780.  Don’t let anyone tell you otherwise.  After Czechoslovakia declared independence in 1918, the Jewish community split into three camps.  Citizens were forced to declare their nationality. Some Jews, the Zionists, declared themselves Jewish.  Others, who had assimilated German culture, picked German.  And Czech nationalists picked Czech.  After 1918, it became increasingly advantageous to be Czech and so all the younger people became Czech, the children spoke Czech in school, etc.  After the Nazis murdered two thirds of the Jews and most of the others escaped, the Czechs then expelled anyone (even surviving Jews) who had declared themselves German.  So the only ones left were the Czech nationalist Jews.  Mostly they suppressed the fact that their families had spoken German in the 19th century.  You hear so many family stories of Bohemian Jews who claim that their grandmother spoke only Czech.  Certainly it was true for some, but only a tiny minority. 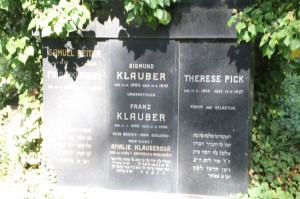 You can tell because in most villages the tombstones after the early 1800s are all in German until about 1900, and mostly German through 1918.  I’ll be able to confirm this again when I go to Ckyne tomorrow, but it is certainly true for the new Jewish cemetery in Prague.  Only the newer tombstones, done after 1918, are in Czech.  Here’s a good example of one.  Franz Klauber died in 1936 and his epitaph (Mein Bestes – Mein Edelstes – Mein Alles! / My Best – My Truest – My Everything!) is in German.  Underneath is the name of his mother, who perished in Treblinka in 1942, listed with a Czech female ending as Amalie Klauberová.  I bet she never called herself that. 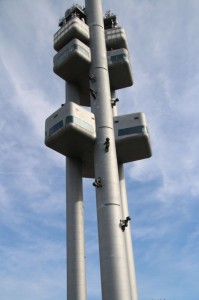 I suspect very strongly that part of the motivation for erasing the Zizkov cemetery in the 1980s was to erase this large remaining sign of the German-speaking Jewish history in Prague.  No doubt the Jewish Community also found it embarrassing to have this reminder of their very recent conversion to Czech.  Bulldozing it was in everyone’s best interest, except for those like me who live abroad and descend from the people who were buried there. Unfortunately, I was too young to know or do anything about it.  Would be different today, I hope. 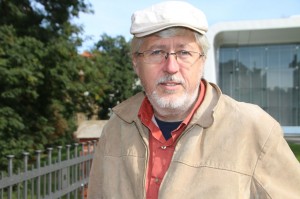 Julius took us toward his office in a nice part of the city, near the river.  I always learn things from Julius, who told me there are “missing” Jewish registers held by the Jewish Musuem of Prague for about 20 Moravian towns.  We need to get them scanned.  He also gave me scans of the index for the mostly destroyed Zizkov cemetery.  I always wonder what happened to all the gravestones and how come there were no pictures.  Julius said he heard that the Jewish gravestones were sold to the CIty and used for cobblestones.  Martin Smok tells me the stones were destroyed already in the 1960’s and in the 1980’s it was only the graves that were removed.  In any case, they are lost to us. 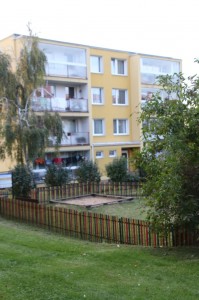 Nathan and I rested a bit and then went by subway and bus to Michaela’s apartment for dinner with her and Hana.  The apartment building was just as I remembered it, still with the sandbox out front.  Michaela even still had the old 1991 Let’s Go Europe that I had left with her after my first visit.  At that time she had not yet explored outside of Czechoslovakia. By now she is a world traveller, fulfilling her lifelong dream to see the great sights of the world that were for so long cut off to her.  Michaela showed me some old family photographs.  She has better ones of my my great-grandparents than I do!  And a very cute one of my grandmother’s older brother and sister. I took photos of the photos, so now I have them in some form at least. 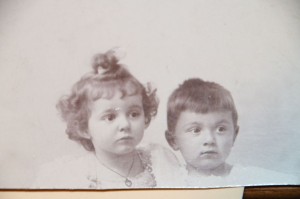 Tomorrow we head down early in the morning to Ckyne for the rededication ceremony.  I am curious what it will be like.  Ckyne is a very small town, and the cemetery is not overly spectacular like many others in Bohemia.  But there are apparently no better examples in the south of Bohemia.  it should be a fun conclusion to our week here.