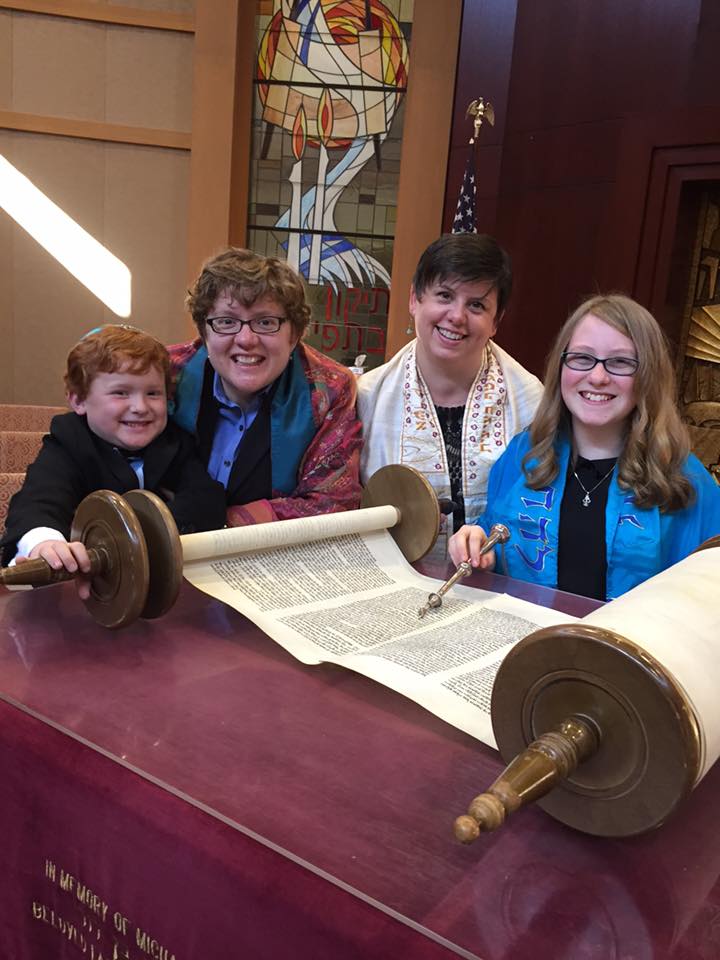 Megan Nachod converted twice to Judaism.  Growing up in Iowa and Ohio, she first was attracted to Jewish culture through Sidney Taylor’s All-of-a-Kind Family about five sisters growing up in New York City around 1900.  In graduate school in Cincinnati, she attended a Passover seder with the family of her friend Stephanie Kaplan.  Always a lover of history, Megan felt drawn to a religion that encouraged adherents to discuss events that took place thousands of years earlier.  She went through a Reform conversion.  Some years later, she went to an Orthodox Beit Din for good measure. Megan has worked for many years in the field of early childhood learning, directing programs for several congregations and the Jewish Federation in Philadelphia.

Megan first contacted me almost twenty years ago after she found her surname listed by me on JewishGen, the Internet hub for Jewish genealogy. My great-grandmother Pauline Nachod was born 1848 in Prague to Josef and Karoline Nachod.  Pauline’s family were members of the famed Altneuschul, the oldest surviving medieval synagogue in Europe.  Her grandfather Gabriel Nachod was a cantor and marschalik, a type of Jewish wedding-singer.  According to Alexandr Putik of the Jewish Museum of Prague, the Nachod family was closely connected with the rabbinic Horowitz family, and the two families are buried together in a section of the old Prague cemetery.  Both Nachod and Horowitz are toponyms, meaning the names are derived from the names of towns near Prague.

Megan was curious to know if we were somehow related.  The Nachod surname was very rare and she had not found anyone else with the name.  Her father is the fourth in a line of four Julius Nachods.  The first Julius was born in Hungary in 1846 and came to Philadelphia where he founded the Class and Nachod Brewery in 1896 and helped build a church in Glenside. Megan said Julius’ parents were Joseph and Franziska Nachod.  Although her family was Christian, I guessed that Megan’s ggg-grandfather Joseph and my gg-grandfather Josef might have been cousins, but at the time, we couldn’t find any proof of a connection between our families.

This week I decided to reach out to Megan and see if we could use any of the newer research available online to help figure out if we were related.  Megan had still not been able to get past her ggg-grandparents Joseph and Franziska.  I decided to search on Ancestry.com and quickly found lots of records of Megan’s American family.  Julius appears already in the 1870 census in Philadelphia.  In 1901 he applied for a passport and listed his place of birth as Kunszentmárton in Hungary. In a Facebook message, Megan confirmed this and said that his father Joseph “was a medical doctor and worked for a count with a large estate.”  I replied, “I wish Josef was named Philipp. Then it would all make sense. My ggg-grandfather Josef had an older brother Philipp, b. 1804, who studied medicine in Vienna and was baptized and disappeared without any trace.” 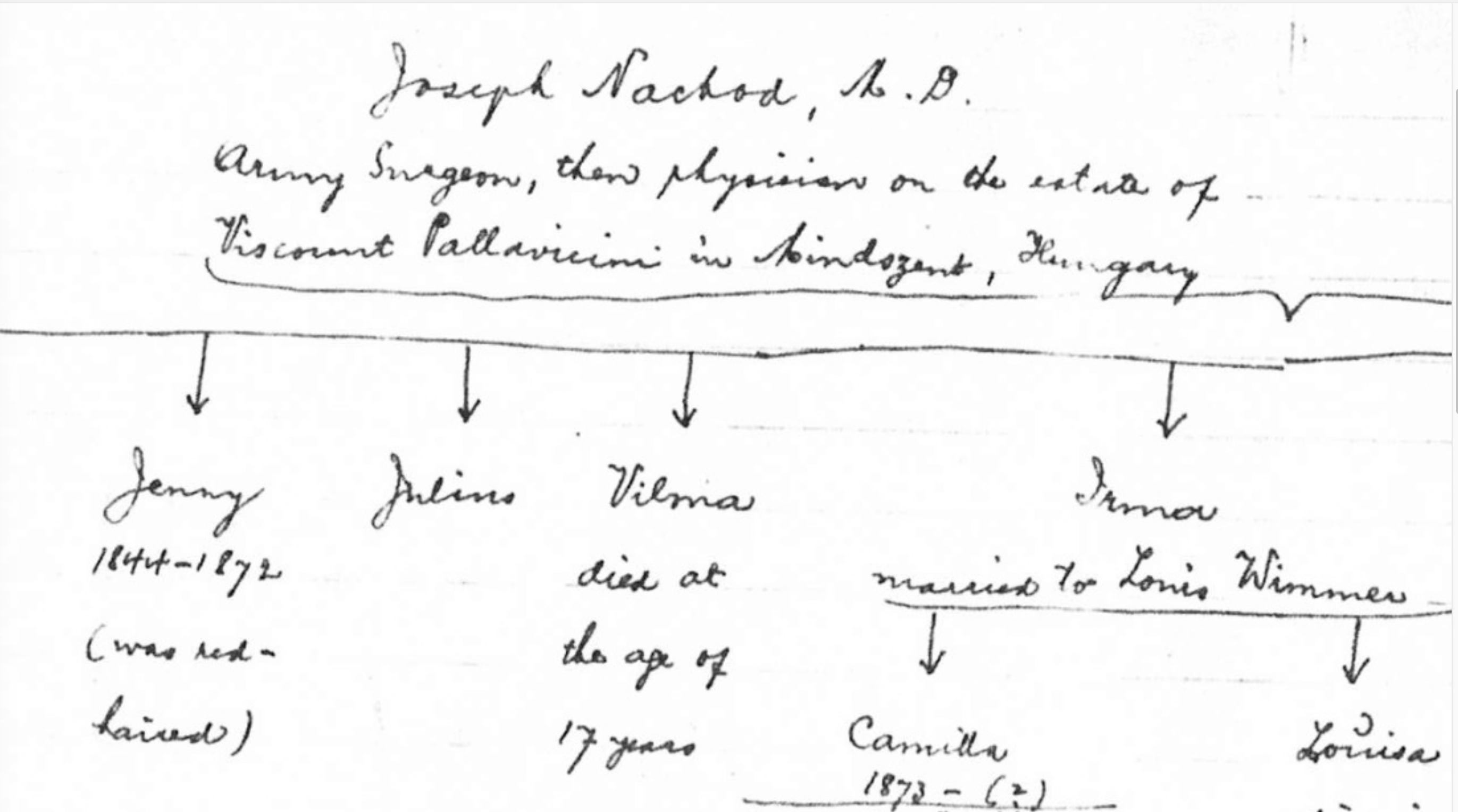 Just then, I decided to try a simple Google search of “Kunszentmárton Nachod.”  The first result was a pdf in Hungarian with one single mention of a Fülöp József Nachod, a doctor who gave the small pox vaccine to 158 children in the town in 1840.  Megan’s “Joseph” was actually Philipp Joseph, the older brother of my gg-grandfather!  (The middle name “Joseph” must have been given to him when he was baptized.) In an instant, two family riddles were solved.

I had been trying to find Philipp’s family for many years. My great-aunt Ottilie, who miraculously survived WWII in Berlin, left behind a tiny handwritten note that said “Our grandfather [Josef Nachod] was not allowed to study [at a University], because his older brother went to study and as a result was baptized and stricken out of the family.”  In the State Archives in Prague, I found a record that said that Josef’s older brother Philipp had been baptized in Vienna in 1831.  I even found a publication from 1829 that listed Philipp as a student in the Army Medical School in Vienna.  But until now I had never figured out what happened to him.

Having linked our Nachod families, I took another look and realized that Franziska Pivany, the wife of Philipp Nachod, also came from a Prague Jewish family. Her father Julius born 1790 in Prague, was also a doctor and came with his wife Anna to New York in 1854, following their other daughter Mary, who had emigrated to the United States in 1850 with her husband Charles Morningstar (Morgenstern).  Julius Nachod must have come to America at the invitation of his aunt and maternal grandparents.

Megan says that this week has been one of the most emotional of her life.  Having firmly established herself as a Jew, she is thrilled to find that she too has Jewish roots, and a new fourth cousin once removed in Los Angeles.