We’ve been traveling for almost a week now — from Las Vegas to Zion to Bryce and now Park City. A great trip so far, with memorable hikes and incredible sights. I had not been on this route since our family trip in 1976.

I was impressed with the drive to Las Vegas, which was nicer than I expected. The groves of yucca trees were spectacular. The outside temp reached 112 degrees as we passed through Baker, California — probably the hottest place on earth at that moment (or second to Death Valley to the north) because the sun was already down on all the other world hot spots on the other side of the globe.

We stayed at the Four Seasons, which is really just the top 5 floors of the Mandalay Bay, a hotel right at the beginning of the famous Las Vegas strip. On arrival we wet out to the water park outside. Joey was crushed to learn that he was not yet tall enough to go into the wave pool. Eventually, all the kids went into the Lazy River and had a blast. We then segued to the Four Season’s pool and ordered food form the restaurant so we could eat by the pool outside.

After the kids and Pam went to sleep, I snuck down to the casino. It was intimidating at first. The last time I was at a casino was in 1991 on my post bar exam trip when I quickly lost $40 in Monet Carlo. This time I gave myself $500 to lose. It took a while, but I wandered around and found the poker tables. I was shown to a seat at a table and bought $300 in chips. A nice guy next to me helped me get comfortable with some of the rules, which were not too different than the ones at our friendly neighborhood poker game. I had lousy cards for the first several times around the table, and so either did not play, or played and lost, until I was down about $200. I bought another $200 in chips to give me enough to play with, and spent the rest of the night clawing my way back. When I left the tables at 12:30, I was down $64, which included giving about $10 in tips. So not too bad for my first time playing poker in Las Vegas.

On Monday we left Las Vegas, gawking at all the crazy hotels on the strip, and headed to Zion National Park. I didn’t remember much from our trip to Zion in 1976, when I was 9 years old. Mainly just the Weeping Rock and being not so impressed. This time the canyon was more memorable. The red cliffs on both sides change colors throughout the day. Maybe we did not stay long enough last time. But we had two nights this time, so a full day to really appreciate the dramatic scenery. Rather than the Weeping Rock, we decided to hike the Riverside Walk to the Narrows. 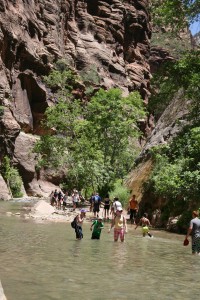 The starting point is the end of the tram line. Droves of people do this short hike, and many then continue on into the Narrows, as the canyon walls move in and you are forced to wade up the river. Pam didn’t want to get her shoes wet, but the kids and I waded across twice so we could go up a little bit. I am sure the kids will remember this hike and Zion.

On Wednesday we went to Bryce Canyon, which I did remember loving as a kid. But maybe it was just the adventure of having out brand new Buick Century station wagon break down, and getting to ride with my dad in the tow truck for 100 miles to the nearest place that could fix it. (I still remember the chili cheese dog I had while we waited for the car to be fixed.) This time our rented black Suburban didn’t have any problems. By the way, speaking of eating, on the way from Bryce to Zion we stopped for lunch at the Adobe Cafe in Hatch (any relation to the Senator?) and everyone loved the food (which doesn’t happen often when we’re on the road). Anyway, Bryce Canyon is just as amazing as I remembered. Pictures just cannot do it justice. We stayed, as in Zion, in the park Lodge in old cabins with two connecting rooms.

On Thursday, we hiked down into the canyon. Every person we met at the Lodge gave us advice on which direction to go. Problem was, they gave the opposite advice. One said to go clockwise; the next counterclockwise. So I chose to go clockwise, starting with the walk down to the Queen’s Garden from Sunrise Point. 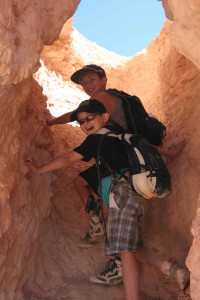 The hike down from there is less steep and so we enjoyed the gradual descent into the canyon.  After resting in the Queen’s Garden, we headed on toward the very steep climb up to Sunset Point.  But while we were still going down, Joey had a sit-down strike and I was worried we’d never make it back out.  I finally was able to get him out of his funk by asking what he would do to survive if we stayed down there overnight (which was what he had decided he wanted to do, rather than go up).  He then regaled me with survival tactics he had learned in repeated viewings of Alvin and the Chipmunks — Chipwrecked, including using his glasses to start a fire.  That got him going and by the end he very literally beat me to the top of the rim of the canyon.

Yesterday, we drove from Bryce up to Park City.  A big fire south of Salt Lake City made everything all smoggy, even up to Park City.  I had been here for skiing around 1979 or 1980, but did not remember anything about the town, which is really charming.  We’re staying in a nice condominium at the bottom of Main Street.  Dora and I walked up to the top and then stopped for ice cream at Java Cow on the way down.  There’s some big Republican get-together with presidential candidate Mitt Romney, so we’re probably the only democrats in town.  I wonder if they all know that there’s no chance he can win?

Today Pam and the kids want an easy rest day.  With the smoke from the fires, it doesn’t make sense to go hiking anyway.  Tomorrow we head to Yellowstone, my first time.