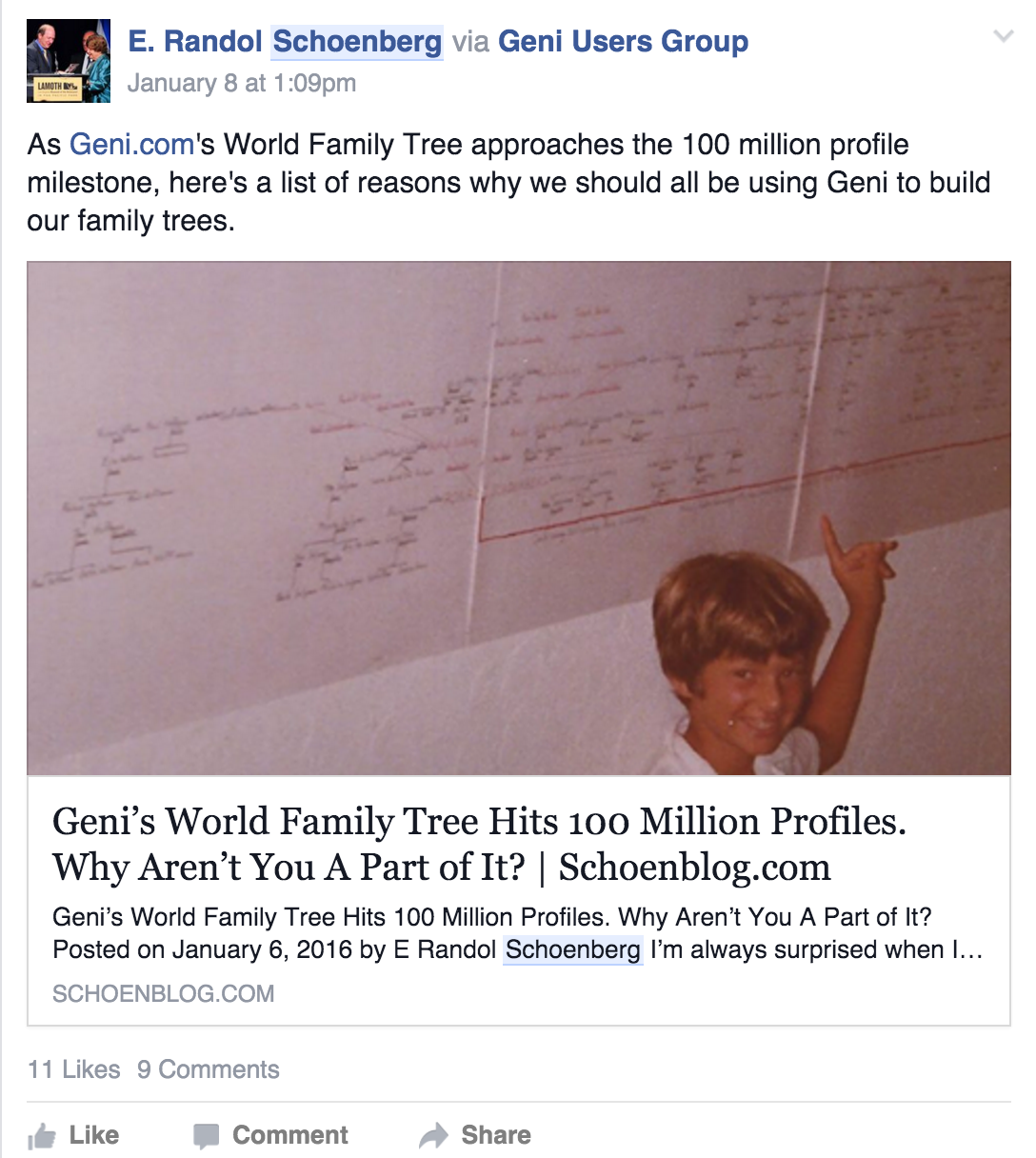 Since I posted my recent blog on Geni’s World Family Tree, the haters have come out of the woodwork. I’ve interacted with many of these people for years, and it’s always the same thing. They get so caught up in their own personal problems and experiences, they cannot see the overall benefit to the genealogical community of what is happening on Geni.com. It’s ok. Not everyone has to love Geni. But then again it’s also not necessary for folks to comment incessantly on my posts about their negative views. If they want to write about Geni, let them do it on their own posts, instead of making inaccurate, misleading and uninformed comments on mine. I do my best to answer them and explain the facts, but that only gets them more riled up. They never seem to let up, and always need to have the last word, which is “I hate Geni.” Apparently that makes them feel better.

I posted a link to my blog on the German Genealogy Facebook group (with over 15,000 members) and twice the Admins have taken down the post (initially without even reading it), because some of the Geni detractors complained so vociferously. I tried to post there because I have some genealogical background in Germany.  My 6g-grandmother Bella Sinzheim (Hahn) was from Frankfurt, and my 7g-grandfather Isaac Sinzheim was from Mannheim. I’ve worked the past few years on a huge project on Geni to enter in all of the data concerning the old Jewish community in Frankfurt, which was one of the few that never got expelled and was continuously present in the city from at least the Middle Ages, if not Roman times. It’s an enormous task, involving the creation and linking together of tens of thousands of profiles. (To give you an idea, the progenitor of the Rothschild banking family, Mayer Amschel Rothschild (1744-1812), has almost 110,000 profiles within just ten steps of him.) The first major compendium of the Jews of Frankfurt was Alexander Dietz‘s Stammbuch der Frankfurter Juden (1907). But the more thorough and accurate work is Ele Toldot (These are the Generations), a collection of transcriptions of genealogical records of the Jewish community of Frankfurt am Main, made by the lawyer and genealogist Shlomo Ettlinger from originals in the Institut für Stadtgeschichte, Frankfurt am Main. Using Ele Toldot, available online at DigiBaeck (the Leo Baeck Institute‘s online database), we’ve managed to reconstruct most of the major families online on Geni. They are all tied together and connected in multiple ways, going back to the 14th century. There have been some previous attempts to do this, but none of them are nearly as comprehensive as what is on Geni. There is still a lot of work to be done. As always, it’s a work in progress. I am hoping that Frankfurt will act as a model for others wanting to build out their town’s Jewish population.  We’re in the process of setting up Geni projects for all of the Jewish Communities in Germany.

The work we are doing on Geni is difficult, important and groundbreaking, and I’d like other people to know about it and maybe even participate. But it’s sometimes hard to get heard over the noise made by the few people who seem so hell-bent on tearing our work on Geni down. I’ve tried to answer all of their complaints, especially in my earlier blog post Answers to Geni Skeptics. But the complainers just aren’t interested in the answers. They only want to hear themselves complain, and jump on any opportunity they get. My Facebook posts attract a lot of attention.  (There are already over 1.5k likes and over 300 shares on this one.)  And the Geni-haters are attracted to them like moths to a flame.

It was very discouraging to have to deal with the administrators of the German Genealogy group, since none of them really know who I am. At first they wrongly thought I was advertising, or that I worked for Geni. I was accused of that in one comment. So many genealogy bloggers are on the payroll of the big companies, they assumed I must be also (as if an intelligent person couldn’t have an opinion in favor of the World Family Tree). I tried to help them understand the situation, but it didn’t seem to work.

On one of the other FB groups, Genealogy, I was heckled and even received anti-Semitic insults.  I was accused of “barking like a rabbi,” and when I called the poster (Justin L Smith) on it, he responded with something about killing Palestinian babies. He later sent me a private message about gun control for dual (Israeli) citizens. 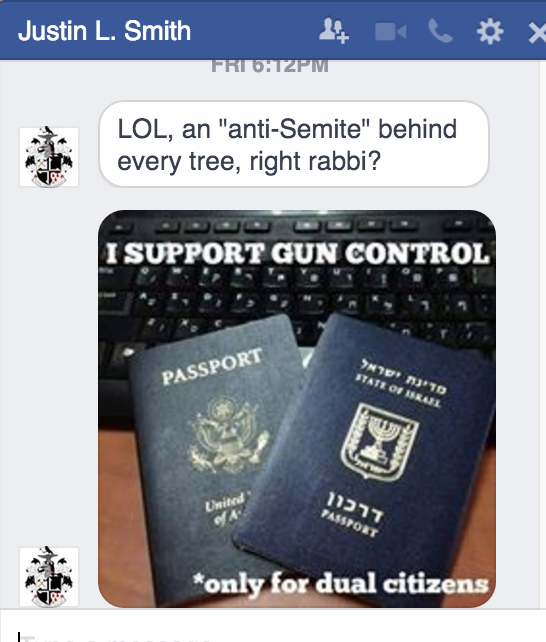 It was all a bit incoherent, as you might expect, but clearly anti-Semitic.

And now the German Genealogy group admin, Ali Constable, who seems nice enough, but isn’t paying that close attention, I think, has decided to delete my post for the second time because some unnamed people supposedly complained. 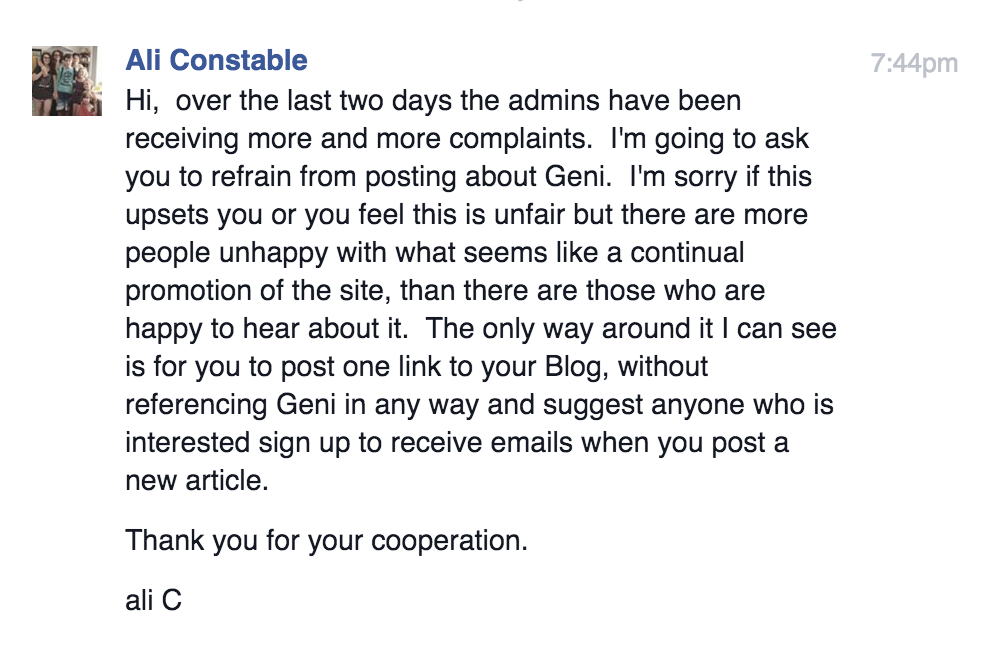 In legal terms what is happening here is called the “heckler’s veto.”  A few people don’t like what I am saying so they argue and complain loudly until my post gets deleted. In the Internet world it’s called “trolling.” It’s a shame, because what I am trying to say would be useful to people doing genealogy. On Facebook, I suppose it’s not easy to tell who is a serious person and who is a heckler. I guess if the Admins googled me, like Deborah Stoloff did today, they’d figure it out. 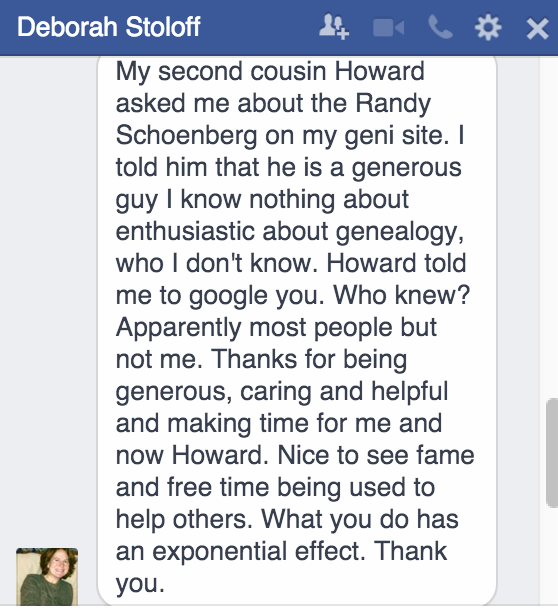 Over time, I suppose it won’t matter. Geni has already won the war; it’s just that most people don’t realize it yet.