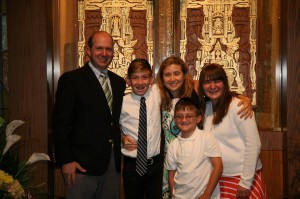 I suppose it is every father’s dream to have a son.  When Nathan was born, I was genuinely surprised.  After all, my college roommate had already had three straight girls.  It wasn’t long before Nathan cracked his first smile, that winning combination of mischief and innocence that you all have seen, and he’s had us in the palm of his hand ever since.

For those of you who were not at Nathan’s bris, I have to explain his very long Hebrew name – Nathan Nachman Avraham.  Pam and I had decided to name our first son after our two paternal grandfathers.  Pam’s grandfather Nathan Mayers was a larger than life figure in her family and we both agreed it would be wonderful to name our son after him.  His middle name would be Arnold, after my grandfather, a similarly important figure in my family.  While I knew that Arnold’s Hebrew name was Abraham after his own paternal grandfather, I had assumed incorrectly that Nathan Mayers’ Hebrew name was Natan.  On the morning of the bris, I learned that his true Hebrew name had been Nachman.  I consulted with our mohel, Rabbi Liebovics, who first reminded me of his generous discount offer – the fifth son is half price!  I told him our dilemma, that we had intended to name our son Natan Avraham, but now we learned that it should be Nachman.  “It’s the same price,” the rabbi replied.  “Just give him three names.”  So that is how our son became Natan Nachman Avraham. 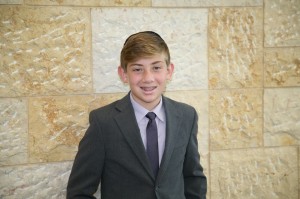 The reason I held onto the name Natan was that it reminded me of the famous 18th century play Nathan der Weise (Nathan the Wise) by the great German author Gotthold Ephraim Lessing.  Lessing was close friends with the founder of the Jewish enlightenment or Haskalah, Rabbi Moses Mendelssohn, the famous philosopher who also translated the Hebrew bible and psalms into German, and was the grandfather of the composer Felix Mendelssohn.  In Nathan the Wise, Lessing makes the case for religious pluralism, so strong that the Church initially banned the play during Lessing’s lifetime.  In the play, the wise Jewish merchant Nathan is asked by the Muslim Saladin which religion is the true religion.  Rather than answer directly, Nathan tells a parable about a magic ring.

A prince made a beautiful magic ring that was said to make the owner beloved by God and man.  He determined that it should be passed on to only his most favorite son, and from him to his favorite son and so on, so that the ruling prince would be the one who received the magic ring.  Eventually the ring came to a prince with three sons, but this prince could not decide between his children.  So the prince made two more rings, identical in appearance to the first.  Upon his death each son received a ring.  But which was the true one?  No one could tell.

Each son accused his brothers of being a fraud, possessing only a counterfeit ring.  So the three sons went to a wise judge.  He said, the magic ring is supposed to make the bearer beloved by God and man.  Which one of you is the most beloved by the other two?  The sons did not reply.  The judge therefore decreed that he could not tell which ring was the true ring, that all three might be counterfeit and the original lost.  To find out whether one of them had the real ring, it was up to them to live in such a way that their ring’s powers could prove true, to live a life that is good in the eyes of God and mankind rather than expecting the ring’s miraculous powers to do so.  In the play, Nathan uses this parable to answer Saladin’s question about religion, saying that each of us (Christian, Muslim or Jew) must live a good life by the religion we have learned from those we respect, without worrying about which one is truer than the other. 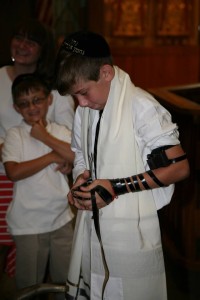 Reading your Torah portion this week, and thinking about the man that you have become, I was reminded of Nathan the Wise.  Nathan, you have a heart of gold, an internal moral compass that sets your course.  The Torah has lessons for all different types of people.  Some people need to be taught that there are terrible consequences for their bad acts, that they will be rewarded if they do something right, and cursed or punished if they do something wrong.  Some people need to believe that they hold a magic ring that steers them on the right course.  But you, Nathan, don’t need all those tricks.  Think about it.  If the list of curses in your portion had been shorter or longer, would that make any difference to you in how you behave?  If we told you that the Tallis that you received for your bar mitzvah was magic, would it change you?

What makes you so special, and what makes your mommy and me so proud of you, is that you know, almost instinctively, what is right and what is wrong.  You are a kind and caring person by nature, just exactly what we hoped for when you were born.  You treat your siblings and your friends with respect and fairness.  You make good decisions and avoid bad ones.  In short, you have become just the man we always hoped you would be, and we could not be any more proud and happy to be your parents.