The original version of this story appeared in the Jewish Journal.

I had a crazy idea this past summer for a new presentation at the next Jewish genealogy conference scheduled for August 2020 in San Diego.  What if I tried to document, using original sources, a direct ancestral line going back 500 years?  I’ve known for the past 45 years of working on my family tree that my great-grandmother came from an old Prague family, and in recent years I was able, through some secondary sources, to break through and show how she was related to the famous Maharal of Prague and many others.  But I wanted to see for myself if I could really prove that these sources were correct.  So, in October I went on a trip to Prague to find the evidence.

I chose a different line, not to the Maharal, because that seemed a bit too predictable, but rather to the equally famous Maharik, perhaps the most influential Italian Rabbi of the 15th century.  Various sources made this seem possible, but there were many steps along the way.  This trip to Prague would help start me down the path.

Most Jews have a tough time tracing their families more than 100-200 years, but if you are lucky, and can find a connection to Jews living in large cities, going deeper is a real possibility.  Pauline Nachod, the mother of my grandfather Arnold Schoenberg, was born in Prague in 1848.  Her ancestors are buried there in the crowded old cemetery, the one with all the stones going this way and that.

I stayed with my cousin Michaela, whom I found over 25 years ago after the end of Communism, and visited four archives during my week in Prague.  My friend the expert genealogist Julius Müller guided me the first day. In one branch of the National Archives, I was a bit surprised to find a large police file from the mid 19th century for Pauline’s father, the innkeeper Josef Nachod.  I asked the archivist and he said this was quite normal, that some people have thick files of over 1,000 pages.  What was Josef’s crime?  Apparently, he kept his inn open until 11:15 pm one evening, and once was caught allowing two unlicensed musicians to perform.  He was also sued for calling an old man who owed him money a dirty name.  So, no high crimes and misdemeanors, thank goodness.

In another branch of the National Archives, I saw the 1794 census where Josef’s father Gabriel is listed as a cantor, the official book that recorded Gabriel and Joseph’s family (there was a quota on Jewish families in Bohemia at that time so the government kept track of everyone), and the 1849 death record for Gabriel where his profession is described as a wedding planner.  After combing through seven boxes of tax records, I finally located the 1760 marriage permission for Gabriel’s parents Avigdor and Pessel.  I even held in my hands the enormous 1729 Jewish census book that shows Avigdor as a child living with his father Moses, as well as Moses’ father Benet, the son of Manis Nachod.

In the Municipal Archives, they have over 300 boxes of Jewish community records that are still uncatalogued and off-limits to researchers.  But among the catalogued records were files from 1721 relating to Benet’s second marriage and some contracts concerning his house.  I still need to decipher them to figure out what exactly they are.  I also found marriage records from the 1730s, which will be very helpful for other families, but not this line.

I visited the archives of the Jewish Museum of Prague, where the young archivist Tomas Krakora gave me the 1748 census page for when Moses Nachod and his son Avigdor were admitted back to Prague after Empress Maria Therese had expelled all the Jews for three years, and another record of the permission and taxes for Avigdor’s 1760 wedding to Pessel Bunzel (a descendant of the Maharal).  Then I went with Daniel Polakovic of the Jewish Museum to the old cemetery to find the family graves.  Daniel, who has been working on a comprehensive database of the old cemetery, took me off the tourist path into the middle of the graveyard where we found in one section Moses (1759), Benet (1742), and Manis Nachod (1707), as well as Manis’ wife Frumetl Ausch (1724). In another section we found Frumetl’s mother Jentl Chalfan (c. 1700), next to her mother Kressel (1634), great-granddaughter of the Maharal’s brother Sinai.  Jentl’s father Chaim Heschel Chalfan (1648) is buried in Vienna (the grave was buried during WWII and has not been excavated yet), but Chaim’s great-grandfather Abba Mari Chalfan (1586), the great-grandson of the Maharik, is buried in Prague. Daniel took a photo of me next to his grave.  Later he told me about a beautiful Torah curtain (parochet) donated by Manis and Frumetl Nachod on the birth of their grandson Moses, my 5g-grandfather, in 1697. This Torah curtain is now part of the collection of the Jewish Museum in Prague.

I tried to stay focused on one genealogical line on this trip, but I couldn’t help making some other investigations.  My friend Fred Chvatal took me to Hresihlavy, a very small farming village about 90 minutes west of Prague, where the Jewish street looks pretty much the same as it did 220 years ago, when my Zeimer ancestors lived there before moving to Prague. The cemetery there has gravestones made from bright red sandstone that are unique to this area.  But the graves were from after my family left, so we went over to the next village about 10 km away Teresov, where we found some older graves that I photographed.

The success of this trip makes me eager to return for more.  I am so lucky to have found so many traces of my ancestors, who lived for many centuries in this part of the world.  Thinking of them walking the same streets made me feel almost like I was home there. 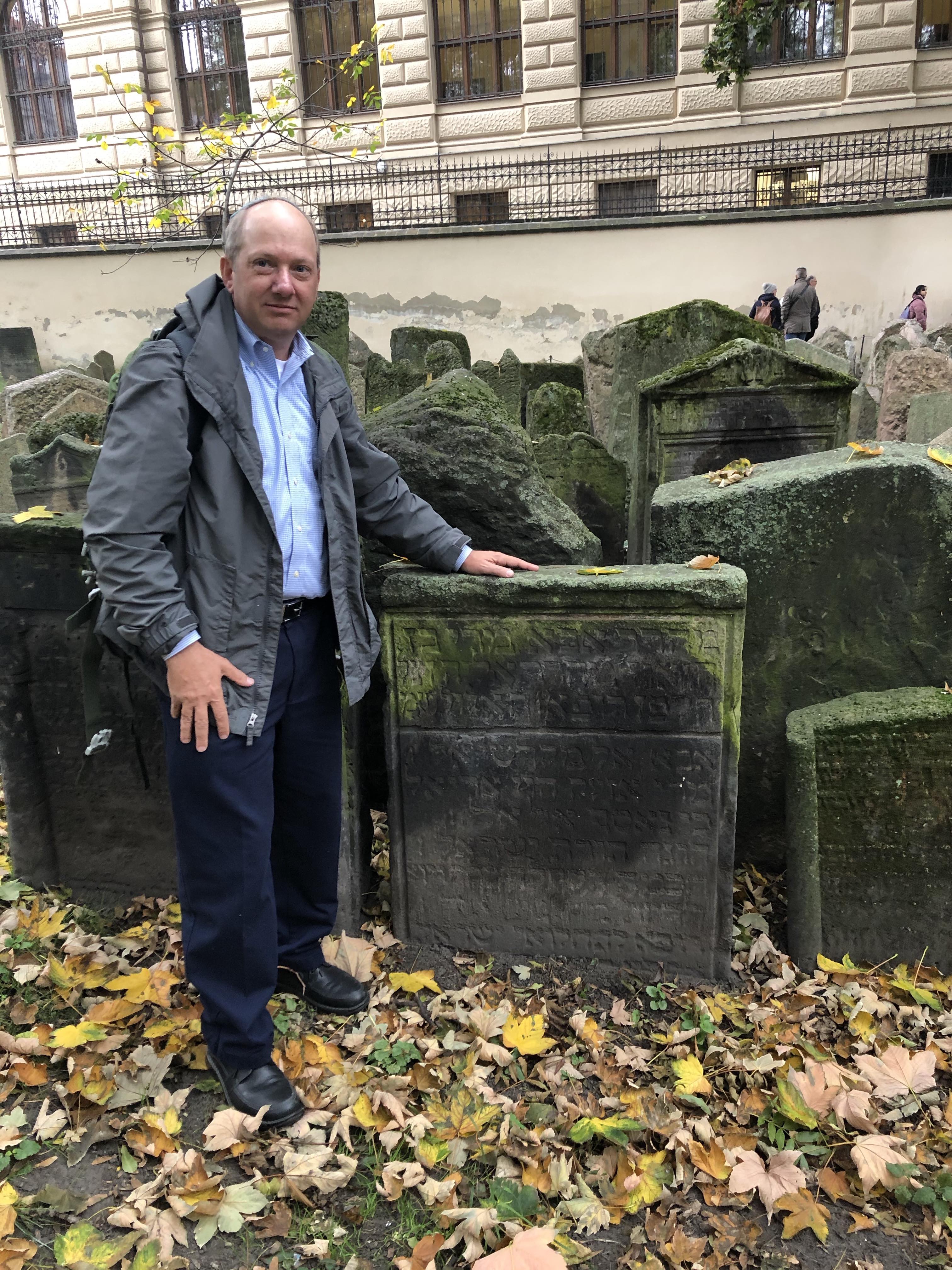 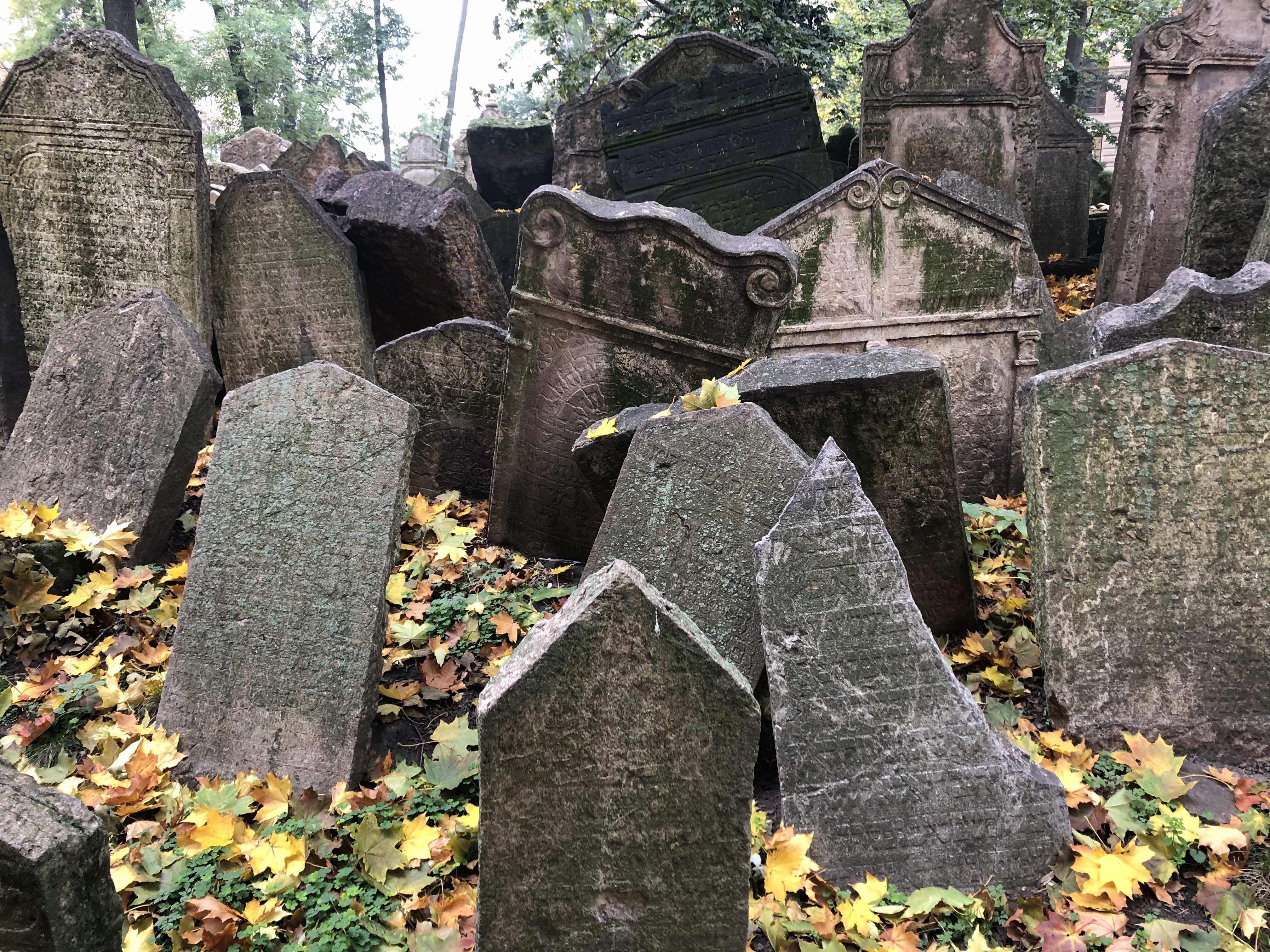 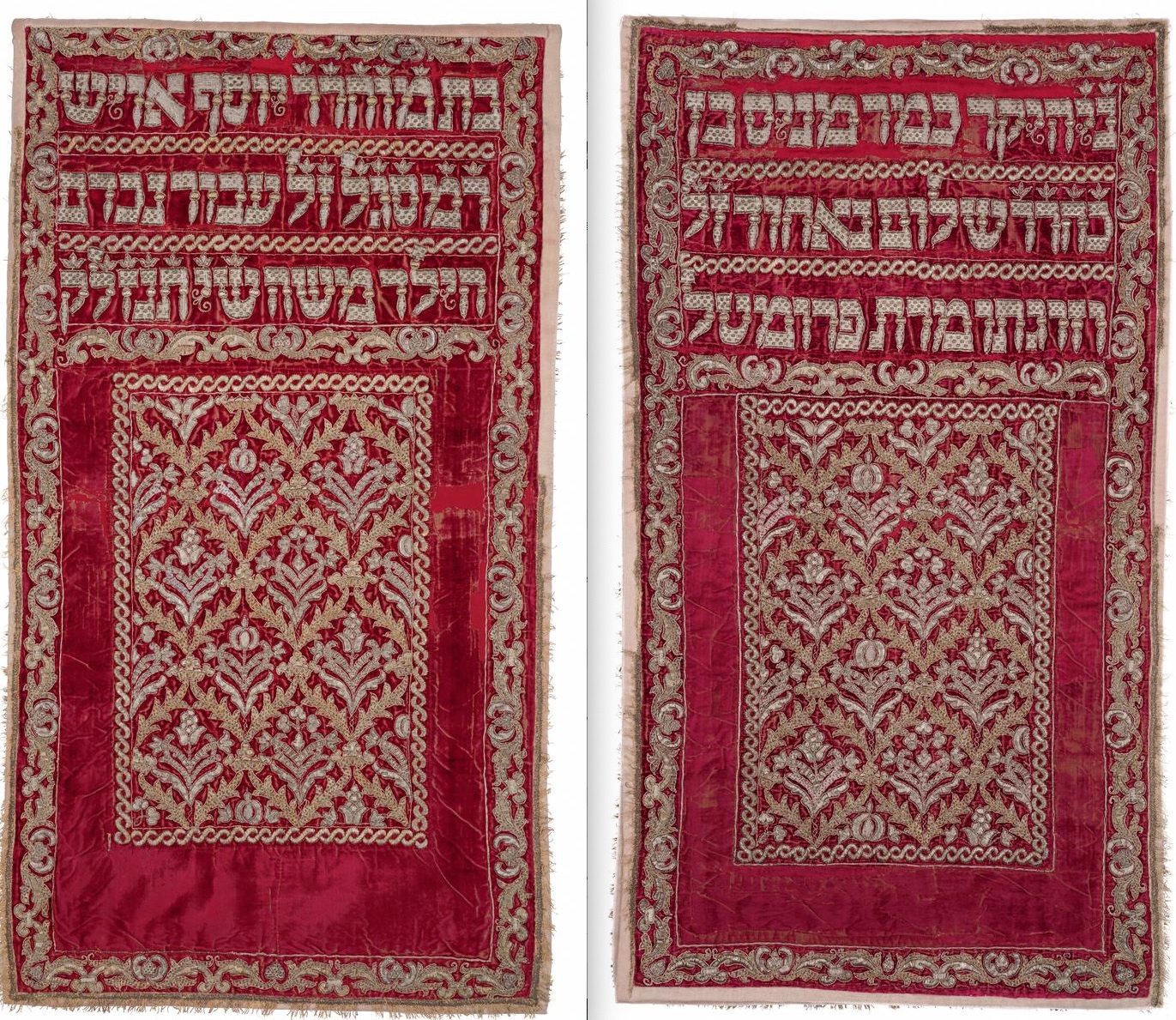 Torah Curtain, gift of Manis ben Shalom Nachod and his wife Frumetl, daughter of Joseph Ausch, Rosh Medina, SeGal, on the birth of their grandson Moshe 1697. 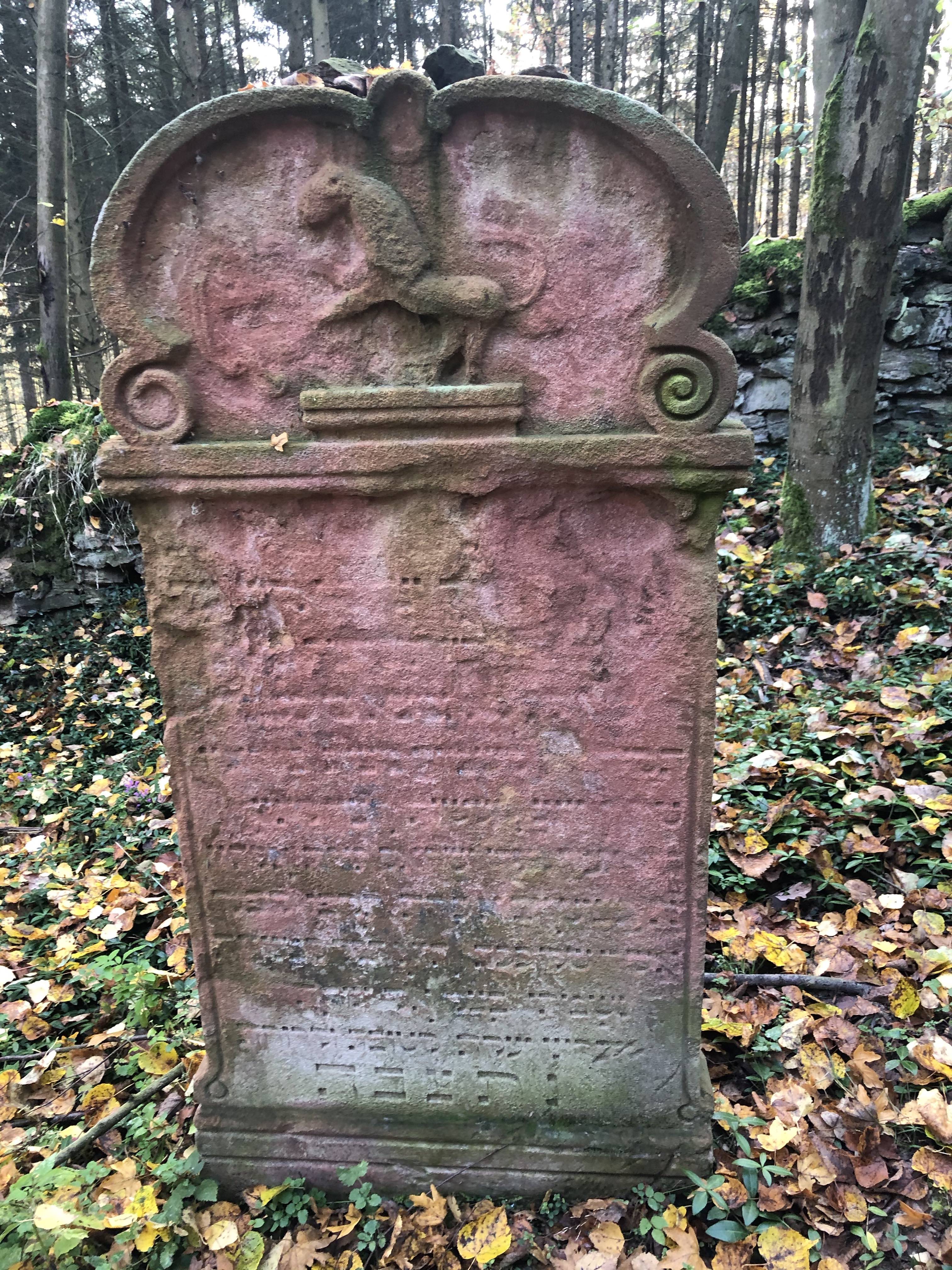 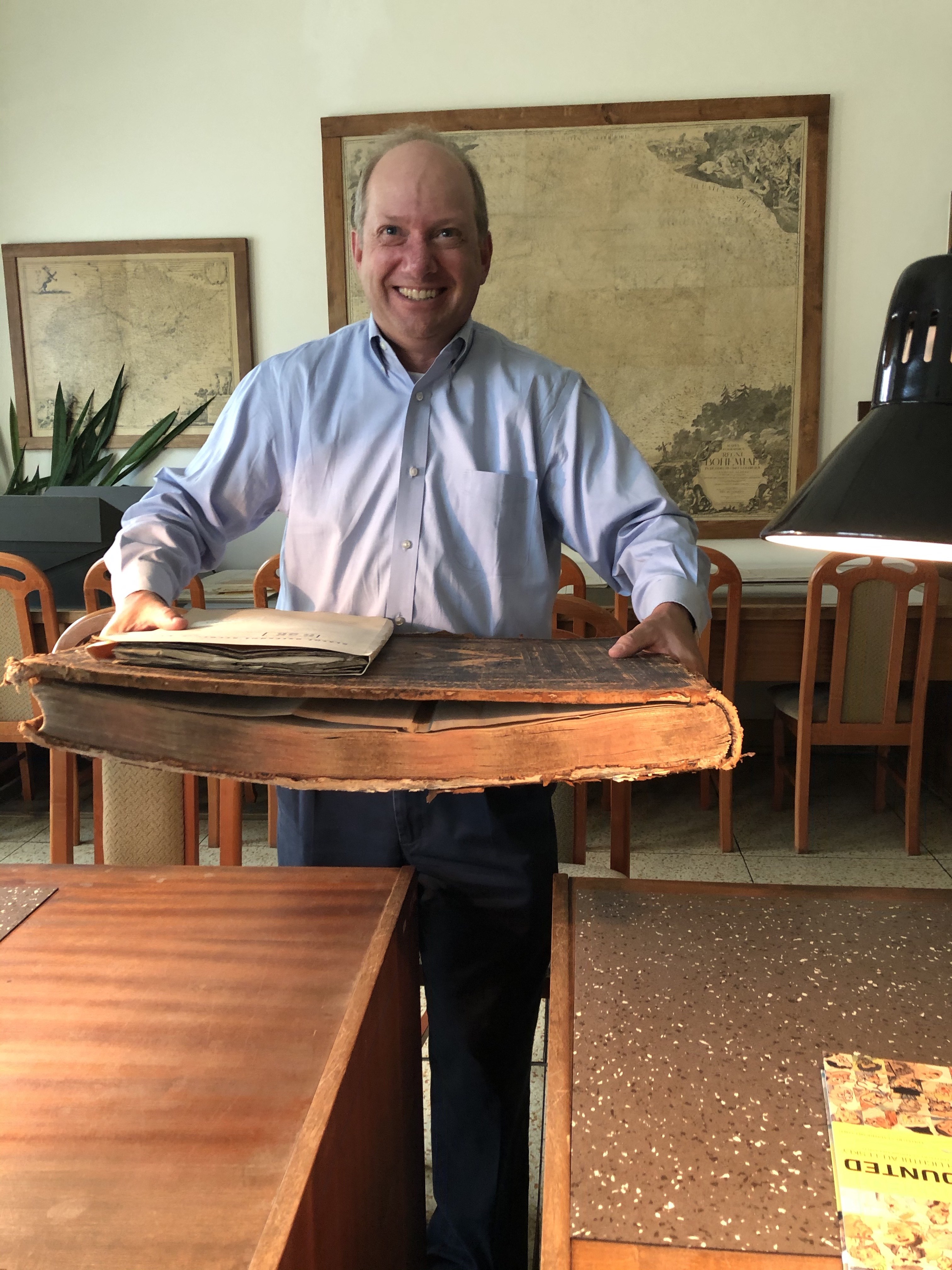