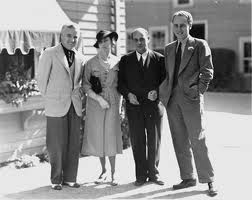 Today would be David Raksin‘s 100th birthday. I just listened to almost all of a two-hour broadcast on KUSC 91.5 FM by John Burlingame. If he mentioned that Raksin studied with Schoenberg, I missed it. Funny, because Raksin himself loved to talk about his time as Schoenberg’s student. And especially the time he introduced the Schoenbergs to Charlie Chaplin. Raksin had worked with Chaplin, orchestrating his music for Modern Times. The Schoenbergs were big fans of Chaplin’s movies, so I am sure they were very happy when Raksin arranged the meeting that resulted in the photo above, with Raksin towering on the right. I’ve always loved how my grandfather’s feet are splayed out Chaplinesque, while Chaplin himself points straight ahead.  Raksin’s most famous work was the haunting theme for the Otto Preminger film Laura, one of the most recorded songs in the history of film.  Here’s Duke Ellington’s version.