This has been an amazing year for the Schoenberg Kol Nidre, a work that is hardly ever performed.  In March, Ricardo Muti (see photo below) and the Chicago Symphony Orchestra with Cantor Alberto Mizrachi gave the first performance by a major US orchestra.  Zubin Mehta followed with the first Salzburg Festival performance in July with Thomas Hampson and the Israel Philharmonic Orchestra.  Now Mehta et al will perform the work again in New York this October at Carnegie Hall.  The press release is below.

I like this work.  We play a recording of it every year on the evening of Yom Kippur.  A number of years ago, I discovered a letter my grandfather had written to Cantor David Putterman of the Park Avenue Synagogue in New York, suggesting that the piece could be reduced for string quartet or even organ.  So I asked my uncle to have Belmont Music Publishers commission Leonard Stein to make a reduction for organ.  Leonard had made the original piano score when he was my grandfather’s assistant in 1938.  We tried to get synagogues to sponsor the commission, but only Cantor Lester Siegel of Temple Emanu-El in Birmingham, Alabama was brave enough to take part.

Here’s the IPO press release about the Carnegie Hall concert:

After the enthusiastic and heartfelt reception the Israel Philharmonic received at the 2012 Salzburg Festival in July (and at the urging of devoted friends and fans of the IPO), the Orchestra has opted to bring Arnold Schoenberg’s Kol Nidre and Israeli composer Noam Sheriff‘s Mechaye Hametim (Revival of the Dead)—two works performed in Salzburg—to New York City for the Carnegie Hall gala on October 25 along with Grammy Award-winning baritone Thomas Hampson and The Collegiate Chorale. The Salzburg performance of these works on July 24 prompted The New York Times to state, “Abetted by Mr. Hampson’s tour de force, in which he also served as narrator in the Schoenberg and spoke and sang in the Sheriff, the evening’s performances were everywhere excellent…The concert was greeted warmly, even clamorously…” The concert at Carnegie Hall also features Yuja Wang performing Mendelssohn’s Piano Concerto No. 1 in G minor. This performance marks the New York premiere of Sheriff’s Mechaye Hametim.

And here I am after coming in on the red-eye for the performance in Chicago with Ricardo Muti.  Might have to do the same for New York. 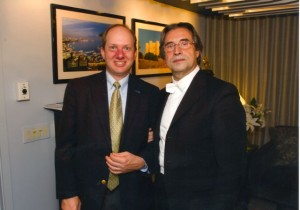