This week, Senator Ron Johnson released an interim report on the FBI’s investigation of the Clinton Email Scandal.  (See February 6, 2018 at https://www.hsgac.senate.gov/library.)  The Report itself isn’t so interesting, mainly a list of facts and allegations that seem salacious to right-wingers, but don’t really amount to anything in particular.  The accompanying documents are what interested me.  But one thing that irks me about the memo is the careless misinterpretation of the law.  The memo includes a whole section on “the law governing the protection of classified information,” which includes both a verbatim text of the law, as well as a misleading summary.  For example, the committee says “Section 793(f) prohibits the mishandling of classified material through one’s gross negligence.”  Well, no.  The word “mishandling” appears nowhere in the law.  “Mishandling” is much too vague a term to be used in a criminal statute.  Instead, the law at issue (enacted 100 years ago during World War I) makes it illegal to permit the “removal” of documents, or to fail to report their removal.  Here’s the big problem for all those trying to suggest that Hillary Clinton committed a violation of this statute.  There is no “removal” of documents when you send an e-mail.  I’ve explained this before in a previous blog but it deserves repeating.  There is simply no law that could make simply sending and receiving e-mails from a private server to authorized recipients into a crime.

I am certainly not the first lawyer to realize this.  No doubt there were lawyers at the FBI and the DOJ who also understood that nothing that Hillary Clinton did with regard to her e-mails could ever result in a criminal conviction.  Sadly, no one ever tried to explain this to the American public.  Months before FBI Director James Comey’s public statements in July 2016, he and his staff began preparing for the day when they might have to explain that there was no case.  They did this while they were still conducting interviews of witnesses, which Republicans believe is evidence that the investigation was not conducted properly.  In fact, all it shows is that the FBI and DOJ were afraid to tell the Republicans that the entire investigation was not worth anyone’s time.

For FBI lawyers like Lisa Page, the pointless, obviously political investigation of Hillary Clinton must have been frustrating.  She was assigned tasks that she and her colleagues knew were never going to lead to the prosecution of any crimes.  It was all politics — and not her politics.  Unlike much of the FBI rank and file, Lisa wanted Hillary Clinton to win. And Peter Sztrok, an agent that Lisa worked closely with on counterintelligence cases, felt the same way.  The two of them became close — too close.  They started an affair, and began texting each other throughout the day.

Those texts have now been released by Senator Johnson, giving us some insight into not only Page and Sztrok, but some of the senior management of the FBI.

Here are a few of the (to me) more interesting portions of the released text messages:

What was Lisa Page referring to when she texted to Peter Sztrok about Rep. Jason Chaffetz on the evening of October 26?

On October 27, 2016, FBI Director James Comey held a meeting where he says that his team unanimously concluded that he had no choice but to reopen the email investigation and notify Congress.  Last year, Comey testified that only one “junior lawyer” spoke up and suggested that maybe he was going to interfere in the election. We don’t know yet who that junior lawyer was.  It could have been Lisa Page, but she’s not so junior, and now it looks like FBI general counsel James Baker excluded her from the big meeting because of “optics” (whatever that means).  Read the exchanged from the afternoon of October 27 below. 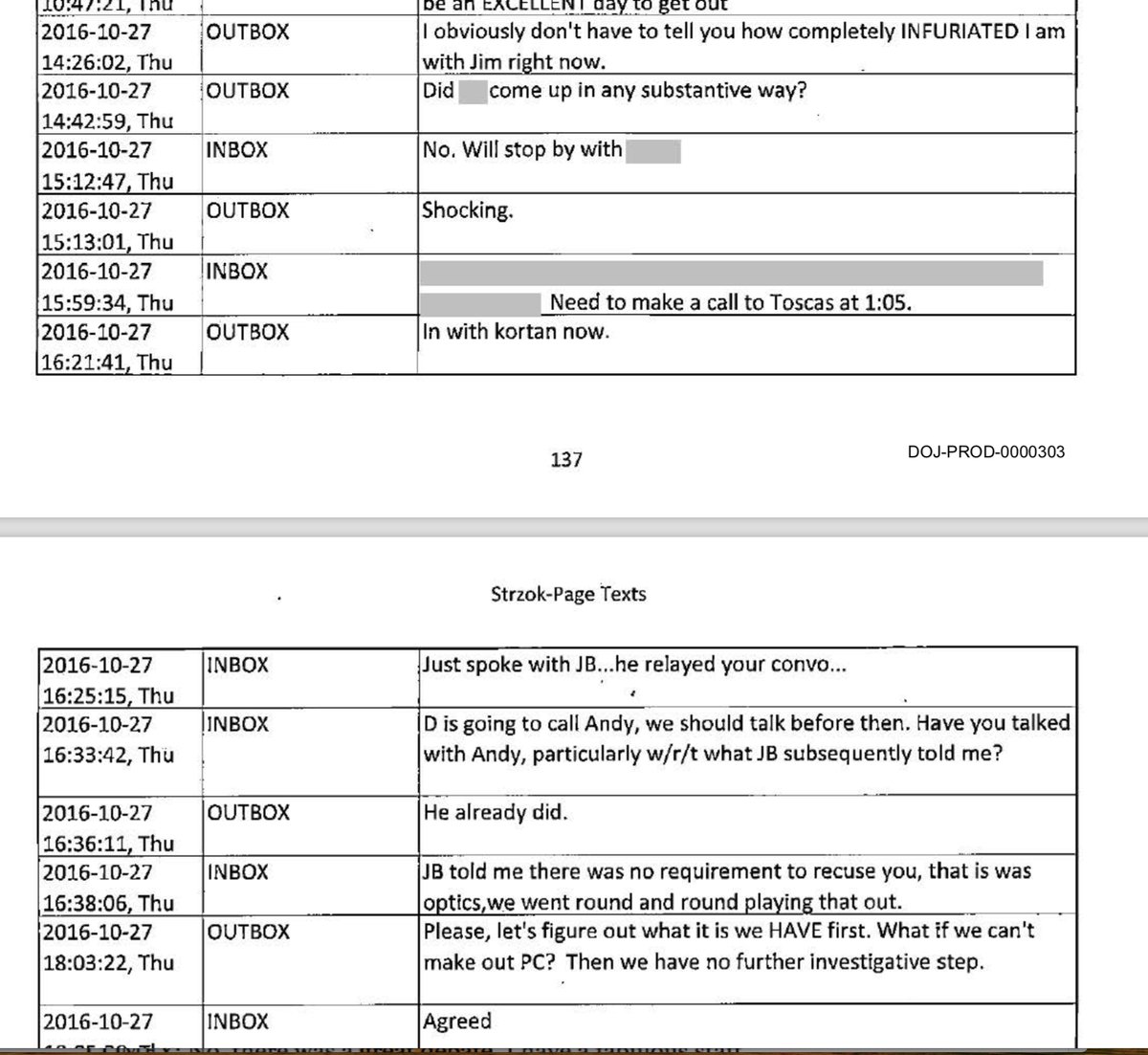 Outbox are from Lisa Page.  Inbox are from Peter Sztrok.  JB is FBI general counsel James Baker (Lisa’s boss).  He was reassigned last month.  Toscas is Deputy Attorney General George Toscas. Michael Kortan is the Assistant Director of the Office of Public Affairs. He manages the FBI’s public relations (and is probably the source of all authorized leaks).  Andy is former FBI Deputy Director Andrew McCabe, who was pushed out of the loop on the e-mail case a week before these texts, after right-wing attacks based on democratic donor support for his wife’s failed Virginia state senate campaign in 2015.

To me, the important part of these texts is at the end.  “What if we can’t make out PC?”  She’s talking about probable cause, the constitutional standard for obtaining a search warrant.  As we know, the FBI obtained the warrant just four days later, on Sunday October 30.  I and others who have reviewed the warrant application cannot find even the slightest probable cause to believe that the FBI would obtain evidence of a crime.  Of course, none was ever found.  The big question has always been who thought they would find evidence of a crime and why?  It looks like Lisa Page tried to make the argument that there was no probable cause.  Obviously, she was overruled by  her boss Baker , as well as Comey, who was hell-bent on proving what an aw-shucks stand-up guy he was by reopening the investigation.

A few days later, on November 2, we find this little nugget about the ongoing effort to review the emails on Wiener’s laptop.

I’ve long wondered why it took a week for the FBI to determine that there was no new evidence on the laptop. After all, they had already reviewed all of the e-mails.  How hard could it be to compare them?  Well, apparently there was a problem, maybe due to security clearance issues, that prevented the FBI from comparing the e-mails.  Lisa was trying to break the log-jam.  It took a week before the FBI admitted that the laptop had nothing new.  In that week, the election was lost for Clinton.

I’m not sure what to make of this next exchange from November 2.  It sounds a bit like Sztrok and Page were trying to wall off the New York office, which may have been the source of press leaks.  Page is angry, and frustrated that she cannot get help from Andy McCabe, who has been recused from the whole case.  Without McCabe’s help, Page felt powerless to stop the bad actors in the New York office.  She didn’t have much faith in Jim Baker either.  We’ve all been there.  The boss is good at doing lunch but pretty worthless when it comes to understanding the details. 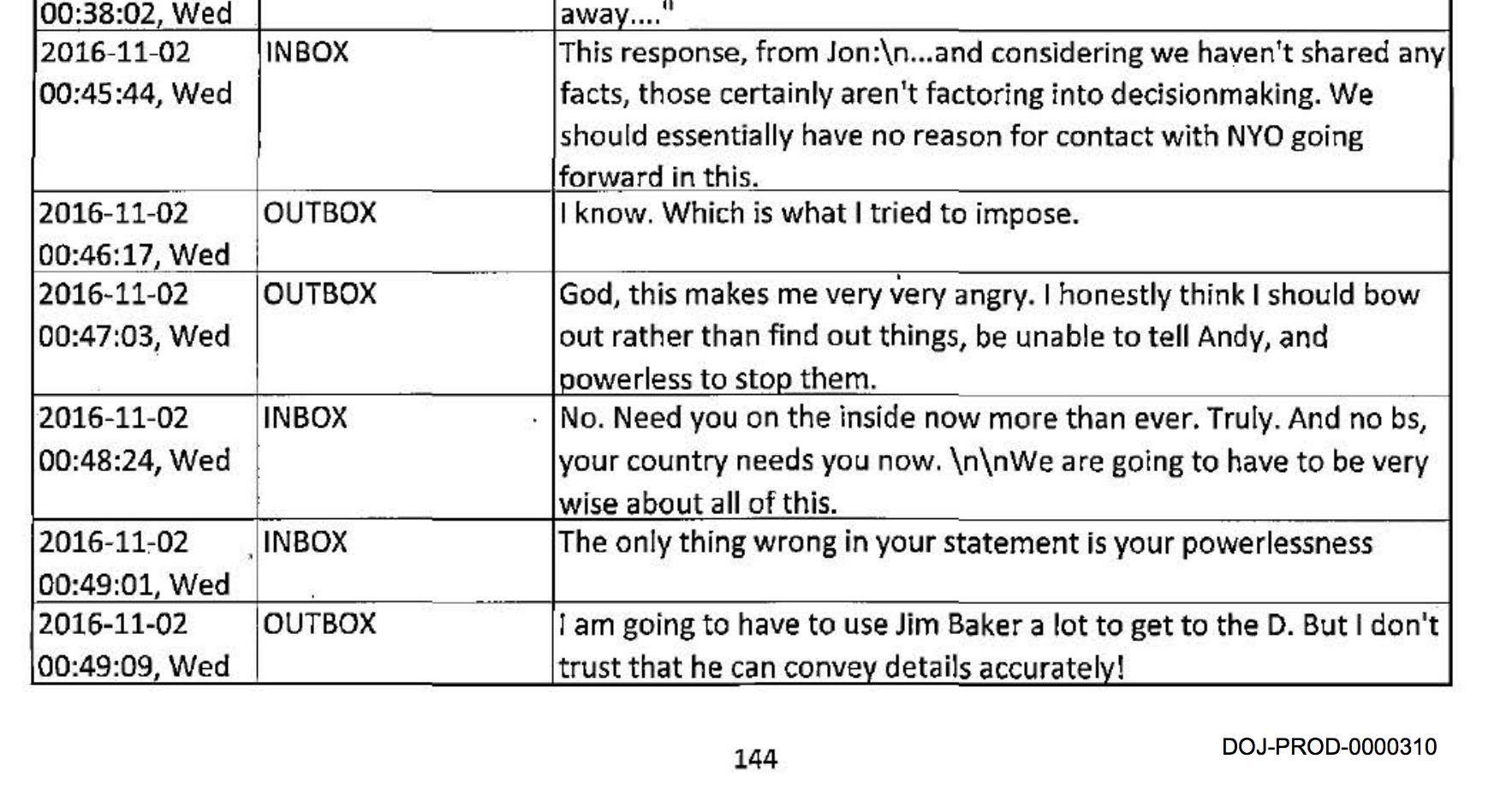 We’re getting closer to understanding what exactly happened that led to the disaster of the Trump presidency.  It was a comedy of errors (otherwise known as a tragedy).  The people who understood and were capable of stopping the disaster were pushed out and excluded, because of “optics,” leaving only the bad actors and the head-in-the-clouds senior officials pretending to do the right thing, all the while doing exactly the opposite.  Lisa Page is looking more and more like a would-be hero, someone who saw what was happening and tried to stop it.